What is Negative Space in Photography? 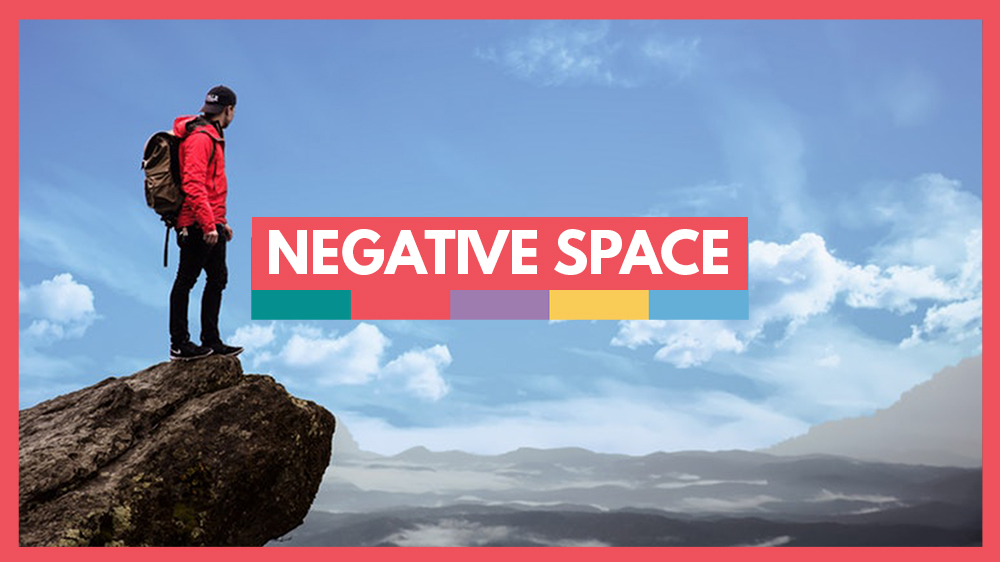 This article reviews how to use negative space in your photography, and hopefully it will inspire you to try using it in your own compositions.

The best way I can think of explaining negative space, is this: it’s a visual pause. You have your main subject in an image, and surrounding it is lots of neutral space, which allows you to focus on the main subject without any distractions. Some people like to crop fiercely, either in camera or in post-processing, to get rid of the space surrounding their main subject. This works for certain images, but many photos benefit from being given breathing room with negative space.

It has to be done mindfully, though. You can’t just snap away at a subject without thought, then decide you want to keep the negative space around it. If not done right, it looks like an ill-thought out snapshot, and you don’t want that. I’m going to show you some good and bad examples of negative space in images, and discuss what works and what doesn’t. 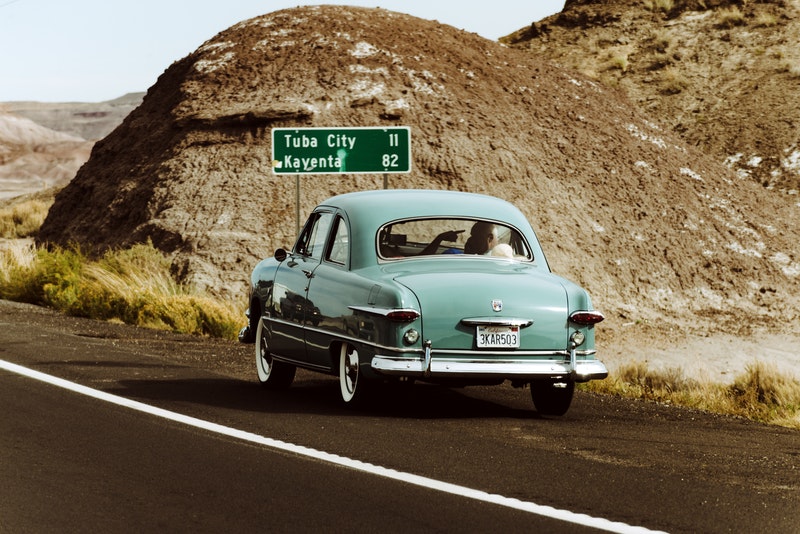 Above is a good example of negative space combined with leading lines. The photographer could have cropped in close to the car and the road sign, but chose to leave the surrounding space. This works, because it gives the car room to ‘move’ through the picture, as our eyes follow the line on the road and the direction of the car.

This may not have worked so well if the background had been a busy, colorful city street, but the neutral browns help make the greens of the main subject stand out. 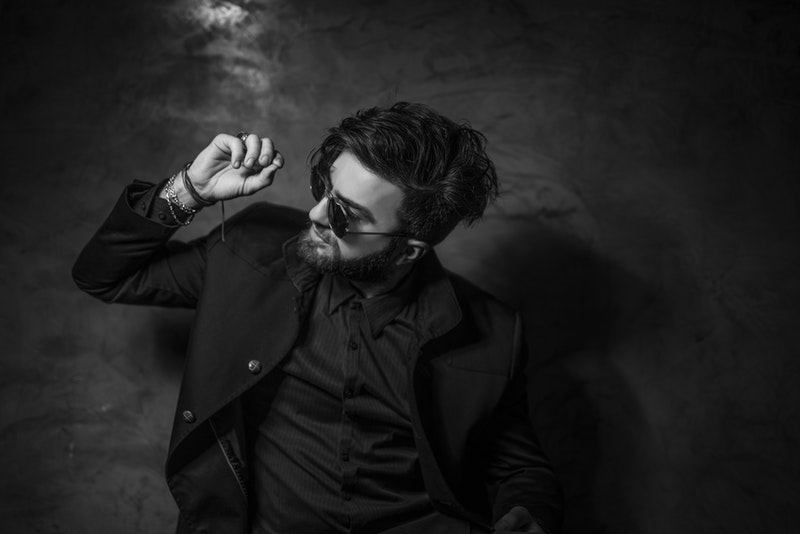 I also like the use of negative space in this portrait. Note the placement of subject more towards the left, with more space on the right-hand side. The extra space surrounding the subject makes him stand out more. 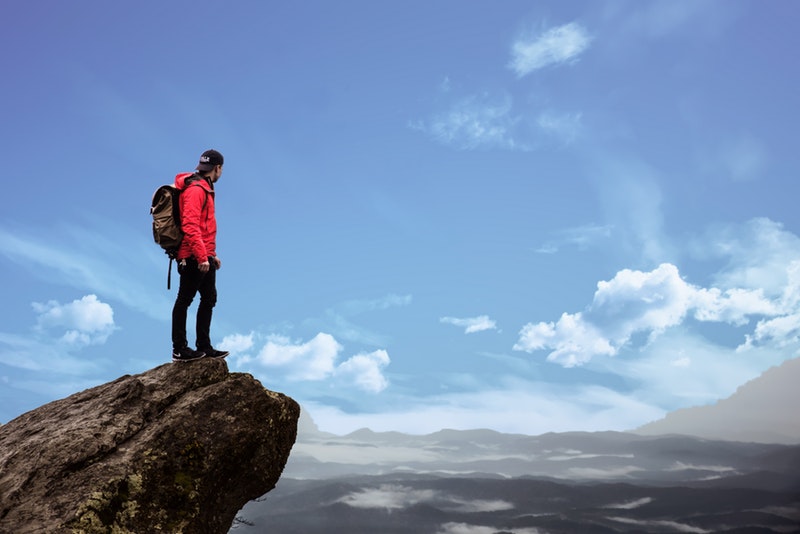 This one is a classic use of negative space. The main subject is the man, and he’s placed towards the left hand side, looking into the empty space. The space around him gives off a feeling of vastness, of how it may feel to stand up there alone in the sky. It shows us how small and vulnerable man is compared to nature, but also gives a sense of triumph at his conquering the climb to reach the highest spot. If this image were cropped closer in, it might not convey the same message.

Negative space doesn’t have to be blank or neutral, the buildings here work just as well as empty sky would have. The reason the buildings don’t distract is because they are thrown out of focus by using a fairly shallow depth of field, and they are all fairly similar in muted colors. If there had been lights on in the buildings, this may not have worked so well, as it would have distracted us from the main subject – the man.

While buildings and forests (and the like) can provide great negative space, it needs to be carefully thought out. The background usually need to be thrown out of focus somewhat so as not to compete with the main subject you’re trying to capture.

When Negative Space Doesn’t Quite Work

Sometimes you’ll come across images where the photographer has tried to use negative space in their images, but something just doesn’t seem quite right. I have chosen a few examples here, but bear in mind that this is just my opinion on the subject – others may disagree, and indeed, you may disagree with my choices. That’s fine–photography is very subjective, but I will try to explain why I think these images haven’t quite made it. 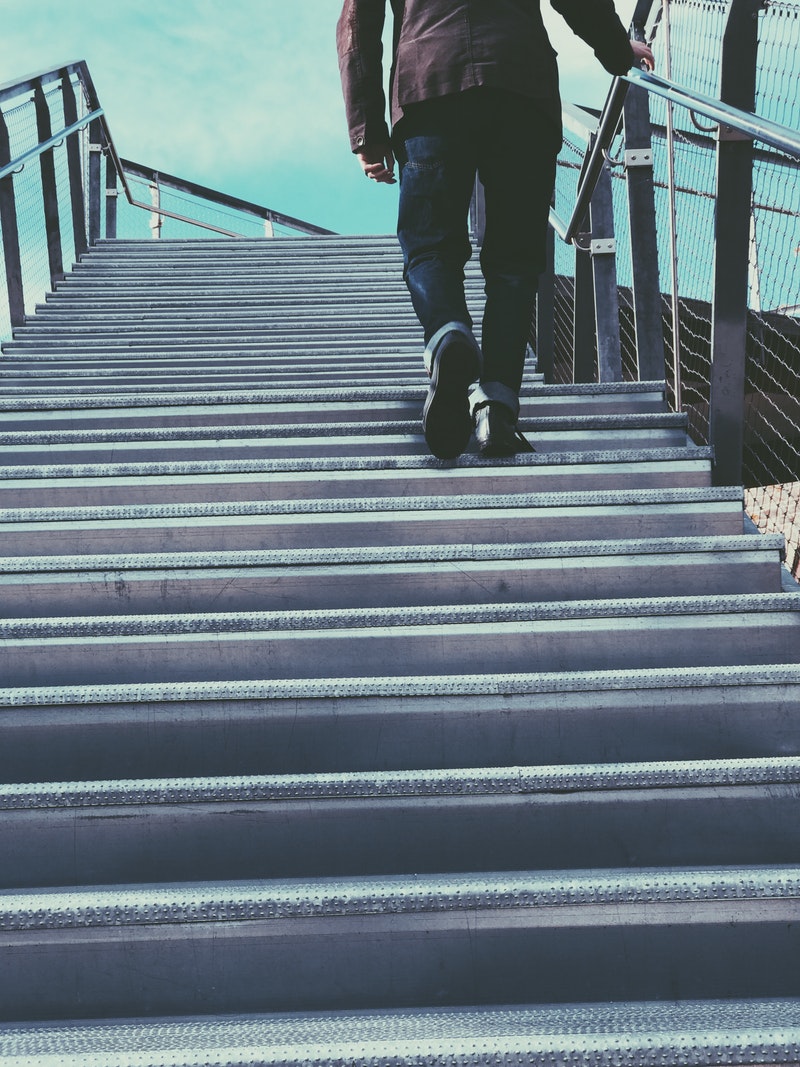 This image just doesn’t look like a great use of negative space to me. If the steps had been straightened in post-processing, and the shot had been more centered to show just the steps, man and sky, it could have worked better. The bit on the right hand side with the stair rails and the slanted steps are just too off-putting for me. Do you agree or disagree? 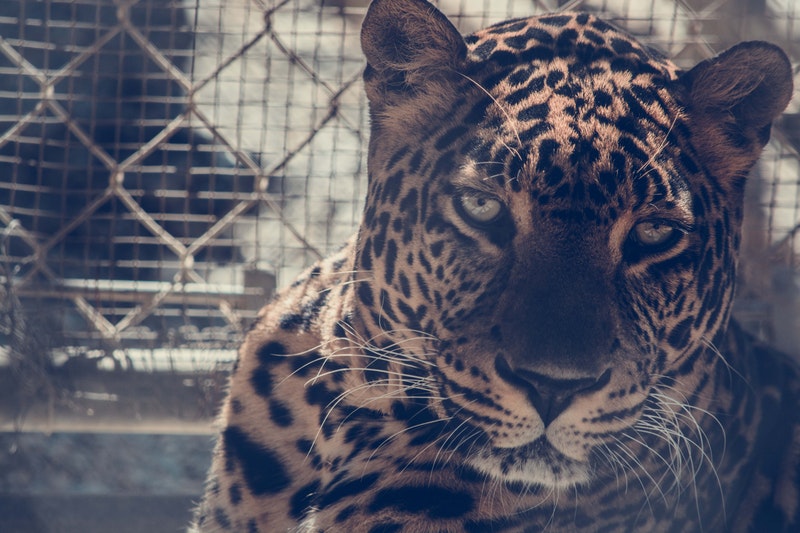 This image of a leopard is another example of something being ‘off’ in a image. I think I’d have liked it better if the image had been cropped square. I think the photographer was trying to show that the leopard is in a cage in a zoo somewhere, but that fence with its diagonal lines is distracting.

If the photo had been cropped square, we could still have seen a few pieces of cage in the background to give us context, but it wouldn’t have been so distracting from the main subject. I also think the leopard is too far to the right hand side of the image, and the top of his ear is cut off. 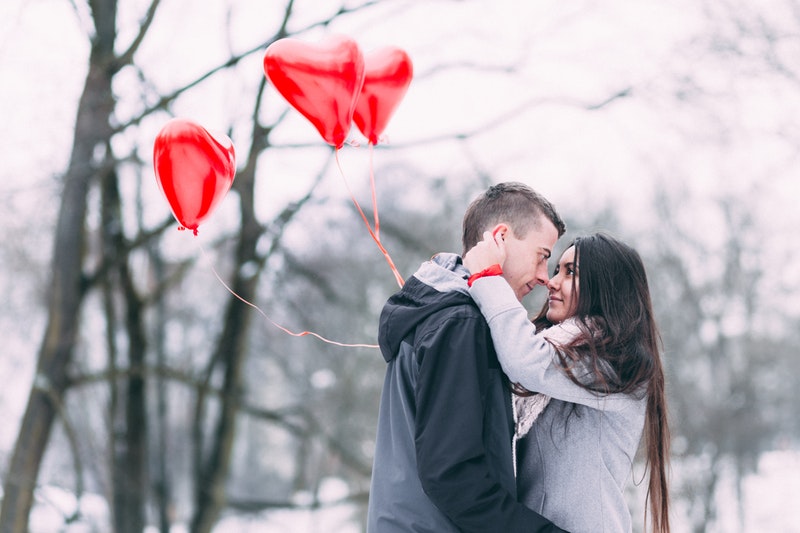 This image doesn’t work for me because I cannot tell what the main subject is – the couple or the balloons? The trees are nicely out of focus in the background, and there’s plenty of  well-thought out negative space, but those bright red balloons are the first things my eye is drawn to! The couple seem almost like an afterthought.

If the balloons were toned down in color in post-processing, and the furthest left one was removed, I think the image would work much better. I used this as an example to show that you have to take care that all elements of your image work together, and that negative space should not distract from your main subject.

Search the internet for negative space images, and do some comparing for yourself. See if you can tell right away which work, and which don’t. More importantly, see if you can work out why they work or don’t work. You can use that knowledge to improve your own compositions. 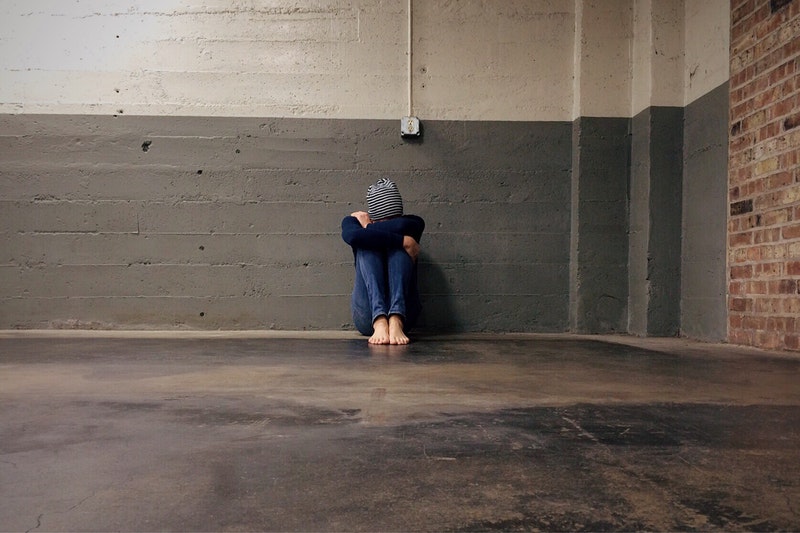 What do you feel when you look at this image above? What is it trying to say? I think it’s showing loneliness and despair, not just because of the way the subject is posed. The bleakness of the negative space surrounding the person adds to this feeling. The subject is alone in this vastness of cold, hard space. The negative space helps to make him look small and vulnerable. 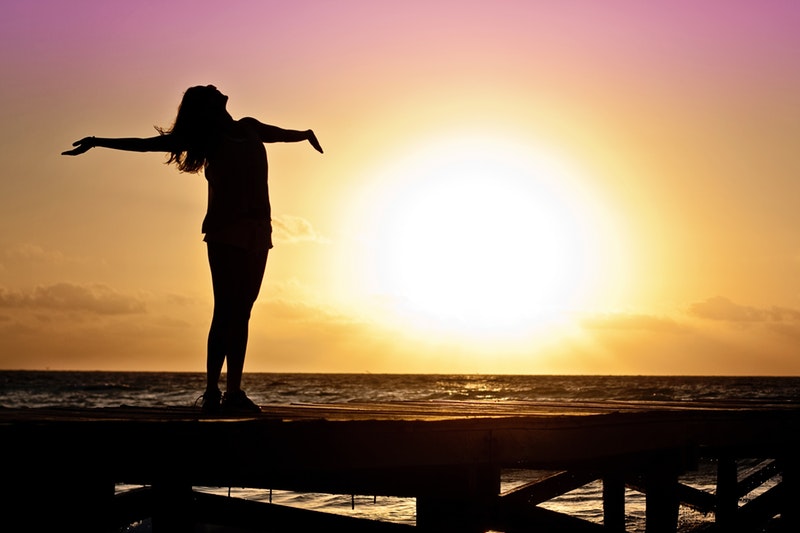 This image above is at the other end of the spectrum. We see brightness, sky, sea, a new day dawning in the negative space. Combined with the joyful pose of the woman, this makes us think of hope, joy, freedom, new beginnings. In addition to the negative space, this photo also uses the Rule of Thirds to make a well-balanced composition. 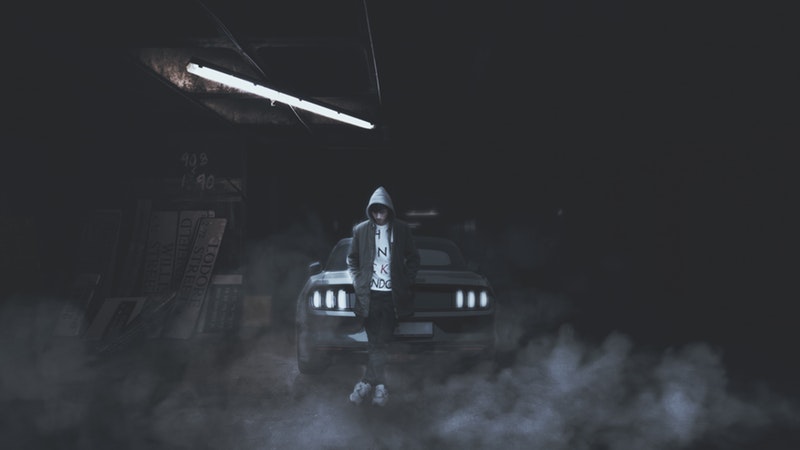 What does the negative space around this image conjure up? It’s very sinister and menacing in tone, with lots of black negative space to emphasize that. Would this have worked as well if it had been bright, sunshiny negative space? I don’t think so! It would have taken on a totally different meaning.

I hope I’ve given you some inspiration to try using negative space in your images. As with any compositional rule, only use it if you feel it will benefit your image, not just for the sake of it. Remember, in photographic composition, there is no right and wrong when it’s done with purpose. If something suits the story you want to tell, but it’s frowned on as compositionally or technically ‘wrong,’ do it anyway. It’s your photo, and we only learn by experimenting.

For more photo composition tips and tricks, check out this article on Photography Composition Tips for Beginners.